This instance takes place as a dungeon playable up to 5. However, it remains feasible with less than 5, but plan a build with a minimum of survival. It’s a series of successive events, generally without limited time, and you will have to complete the corresponding objective to access the next event.

Originally, this Winter event moved from capital to capital. Although the process remained broadly the same, each capital was a variant of this instance. From now on, it will be necessary to chain all the events of each version in a single instance.

How to get started ?

Since Wintersday 2014, the festivities have been taking place at the Divinity’s Reach. This event, like almost of all the Wintersday events, takes place at the Crown Pavilion. A sugar cane gate marks the entrance. You will be invited to join in with your group as for a classic dungeon. 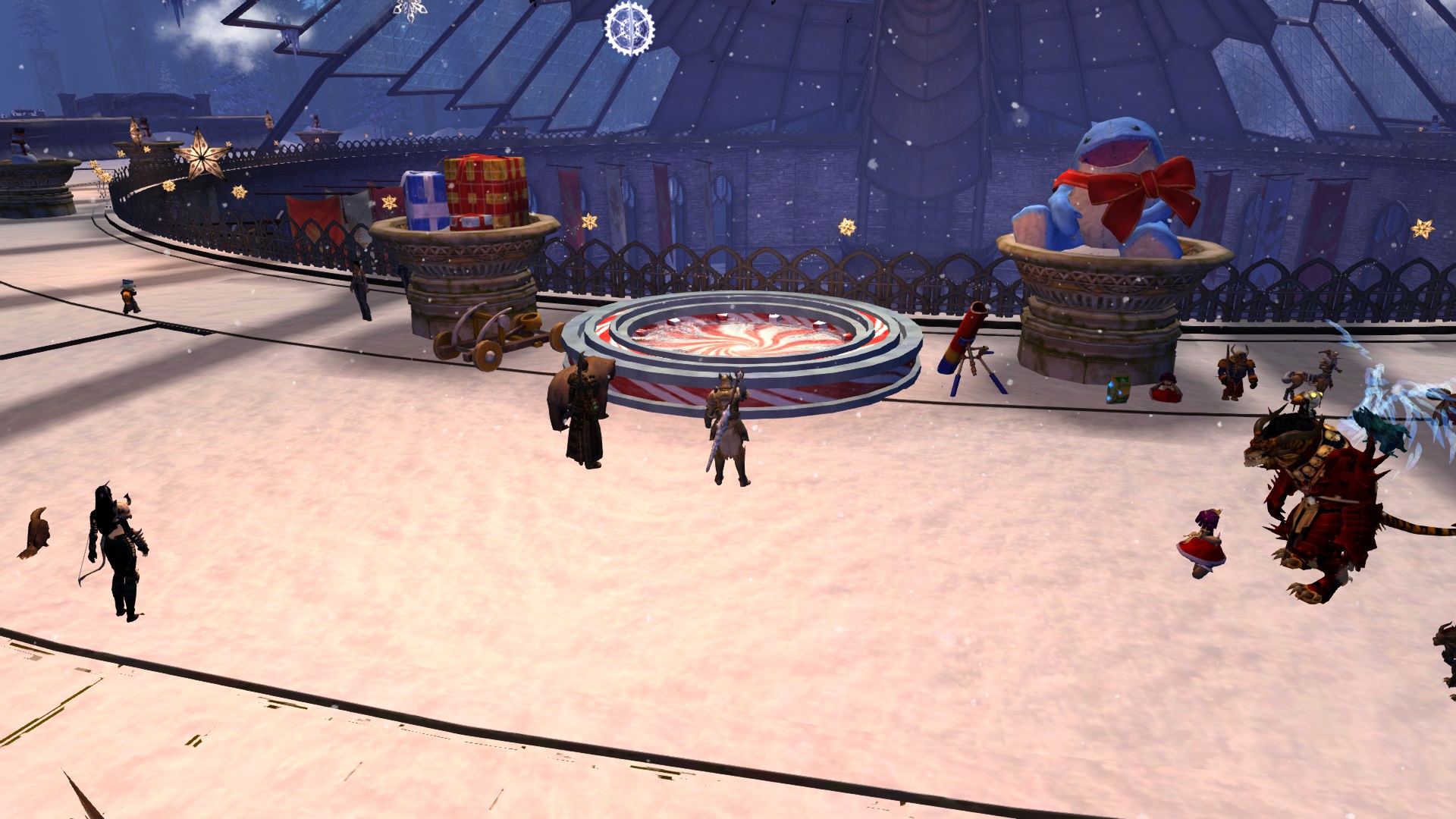 Get gifts for dolls

« Those princess dolls sure are demanding. They want gifts!  »

You must bring 15 gifts to the doll in the center of the area. Those gifts are scattered in the area, or in the possession of Skritts excavators: they seek to bring them back into the tunnels on both sides of the area (behind the sets).

Equip yourself with a plasma paint gun and go paint the white dolls with skill 1. (The queen likes them red !) The dolls are scattered all over the map and pointers will flash when it will left only a few dolls to paint. Don't forget to get on the platforms to the north and south. Tenacious skritts will attack you. It’s possible to get rid of them by repainting them like princesses. Although they become princesses, they do not count in the progression of the event.

« Skritt stowaways have taken over the princesses' hamlet! »

It is simply a matter of defeating the skritts in the area and then holding it to capture it.

Tip: keep one of the skritts alive and out of the circle while one of your teammates stays in the area to capture it. This prevents the spawn of the next wave. 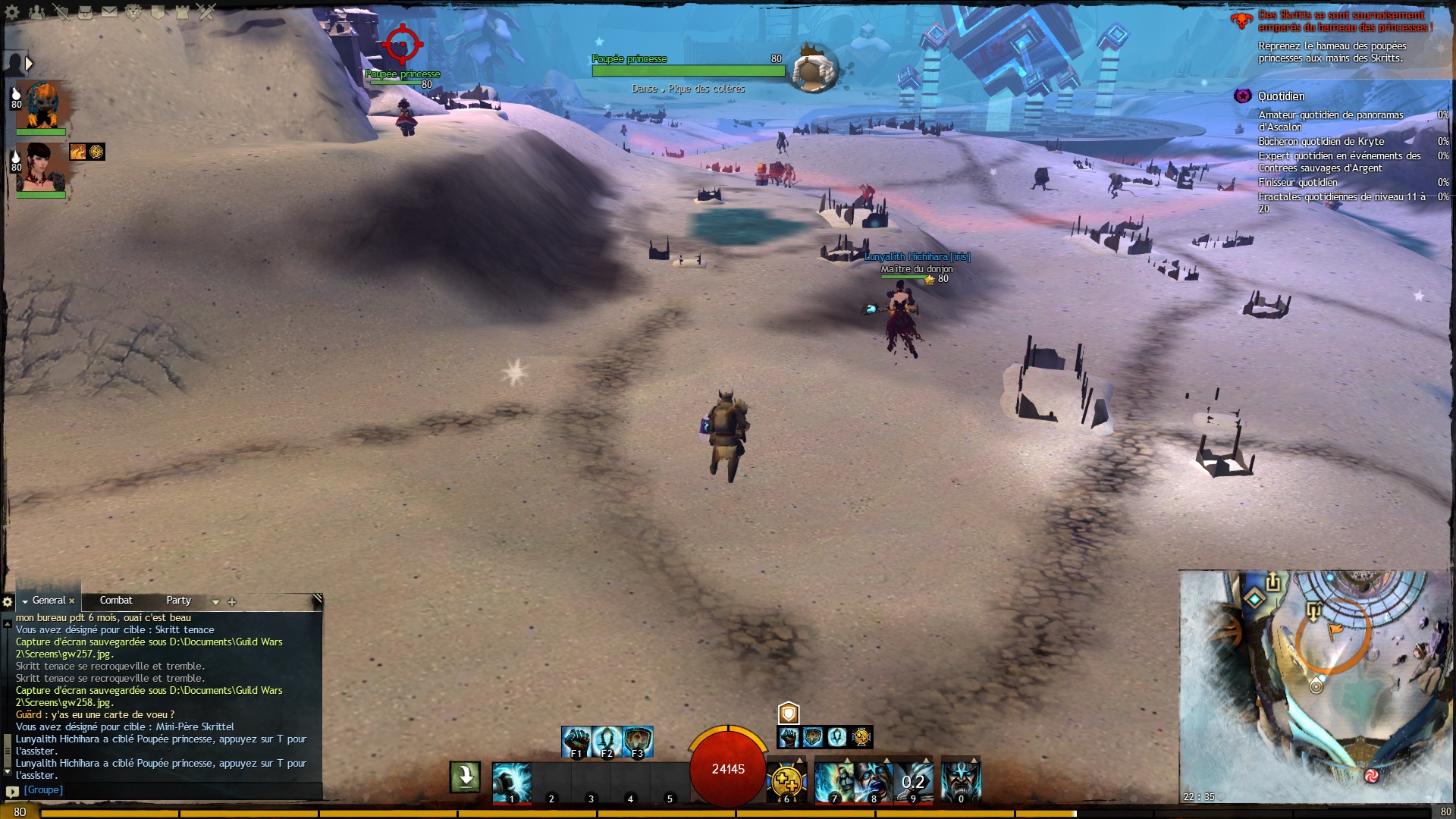 « The Ventari toys' turrets are out of control »

As the goal says, just destroy the defective turrets.

« Princess dolls are malfunctioning and trying to ride Ventari toys! »

You can heal them to facilitate their survival. Please note, sometimes, they can onslaught the dolls and significantly move away from the center of the area. You just need to keep one of the Ventari alive to complete the event.

Note: the following event may occur during this one. But it has no time constraints: save it for later and keep protecting your Ventaris! 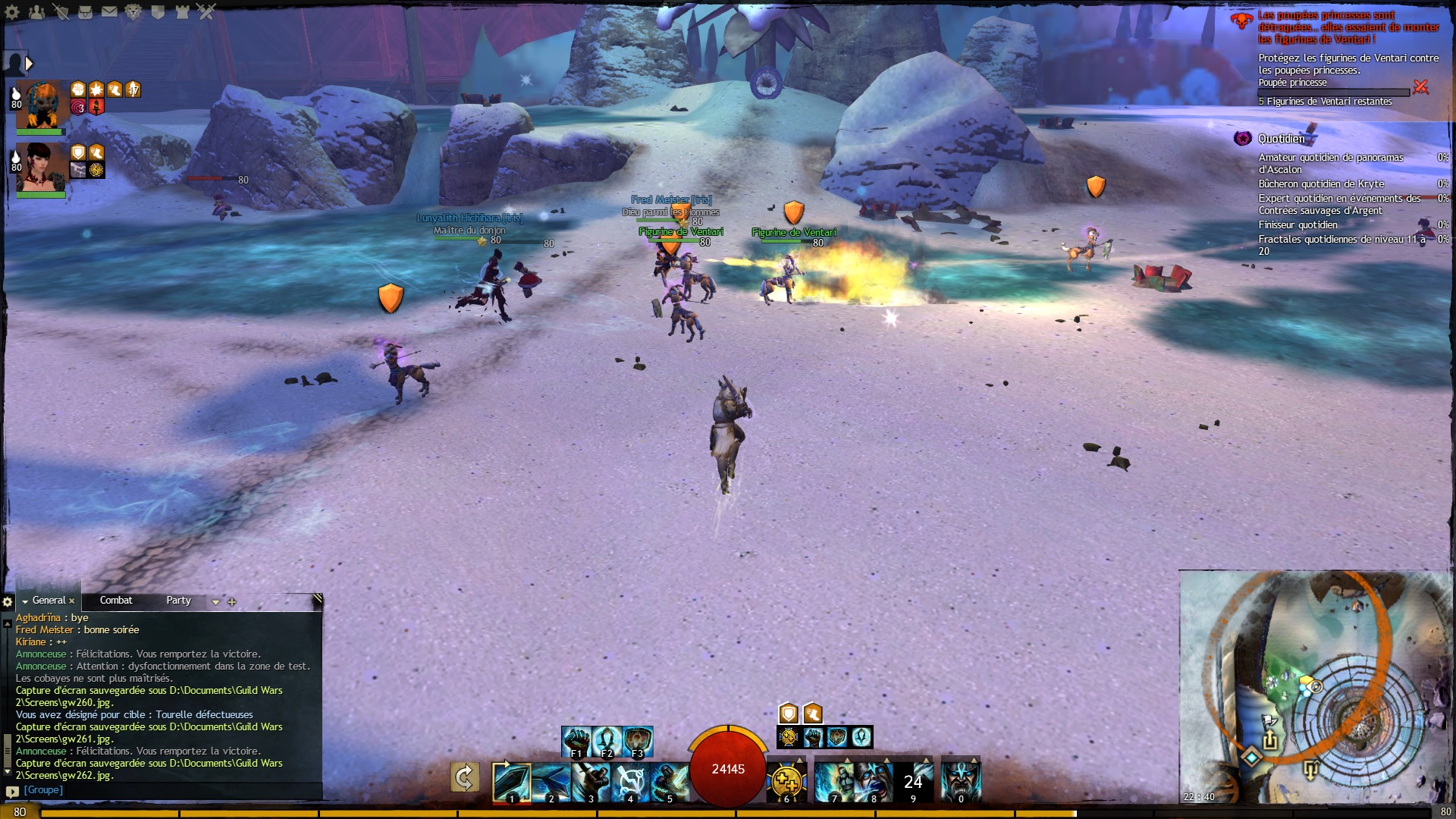 Fight off figurines of defective soldiers attacking the assembly line.

« The overzealous toy soldiers are out of control! »

Destroy the 8 waves of soldiers that emerge the map. 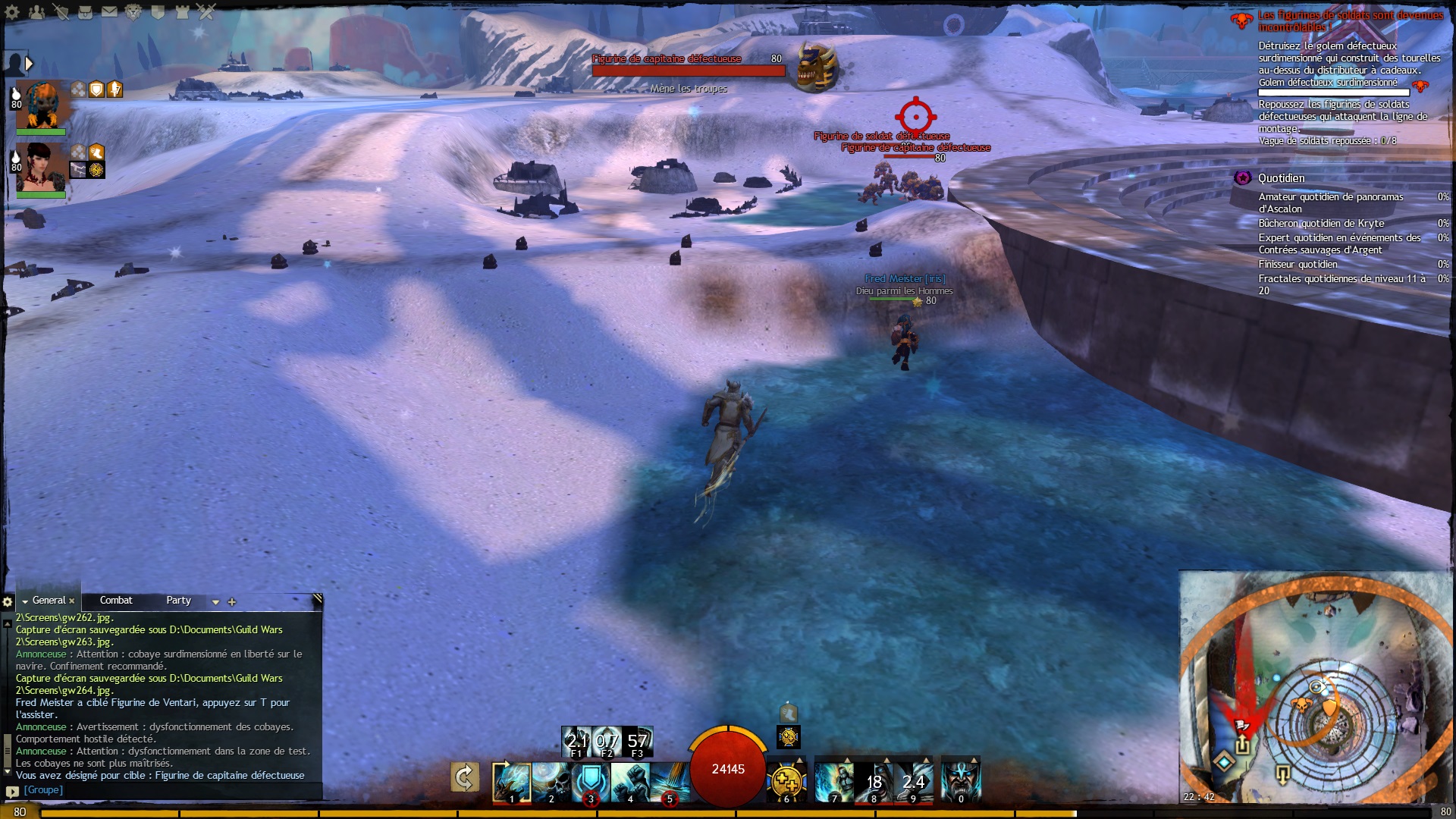 Take back the nest of plush griffins from the princesses

« The griffon toys have been driven from their aerie by bossy princesses! »

Similar to what you've already done with skritts, capture the area. 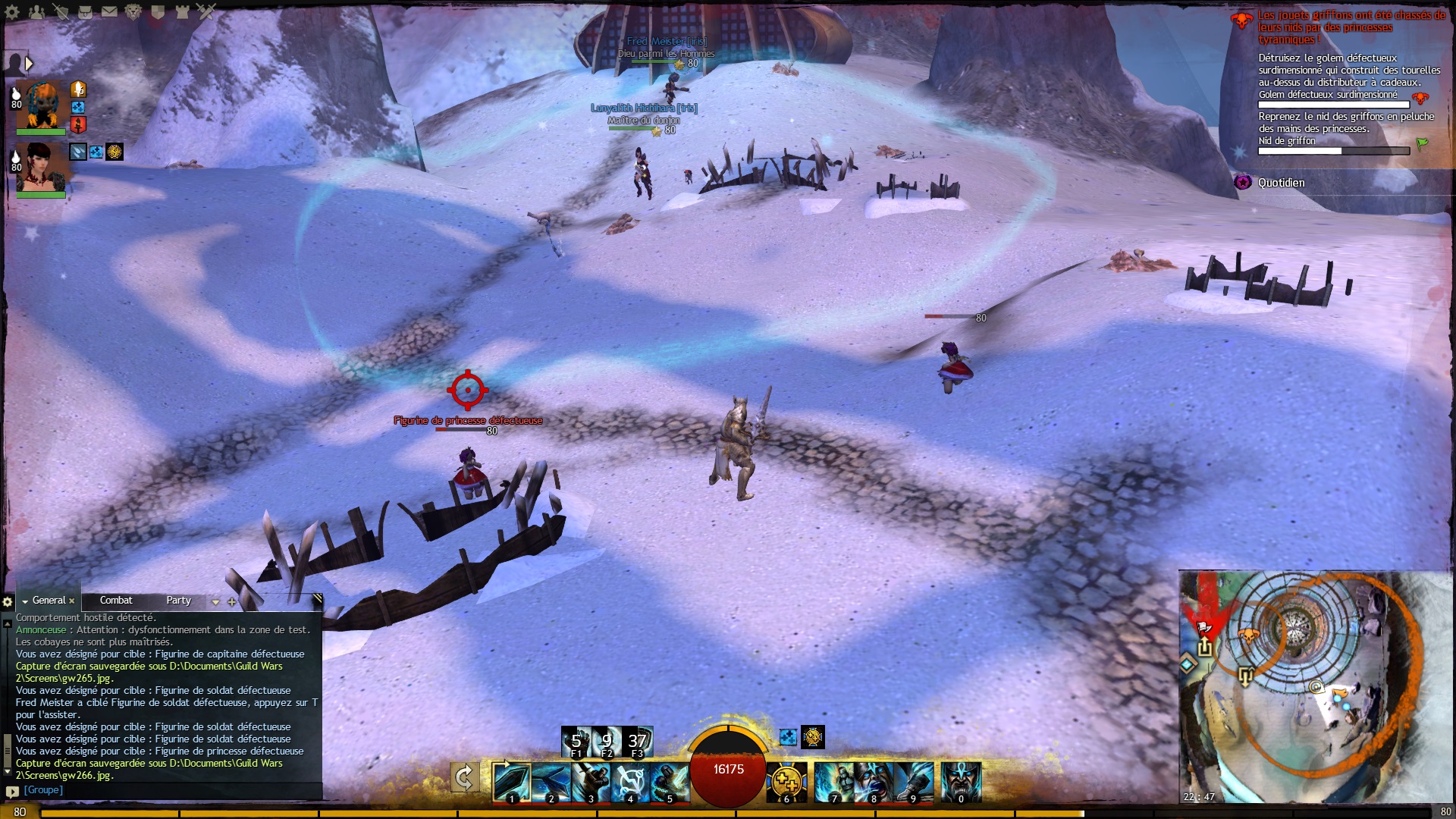 Destroy tar‘s elementals and bring their ooze back to the machines.

« Tixx the Toymaker needs help around the workshop! »

Two deficient machines on both sides of the area must be supplied with silt balls. Destroy the elementals of tar and bring back the ooze balls to the different machines. For greater efficiency, you can group them next to the machine to deposit them more quickly. These elementals are not dangerous; do not hesitate to divide your group in half.

It is time to end the presence of skritts who are trying to sabotage the distribution of gifts! 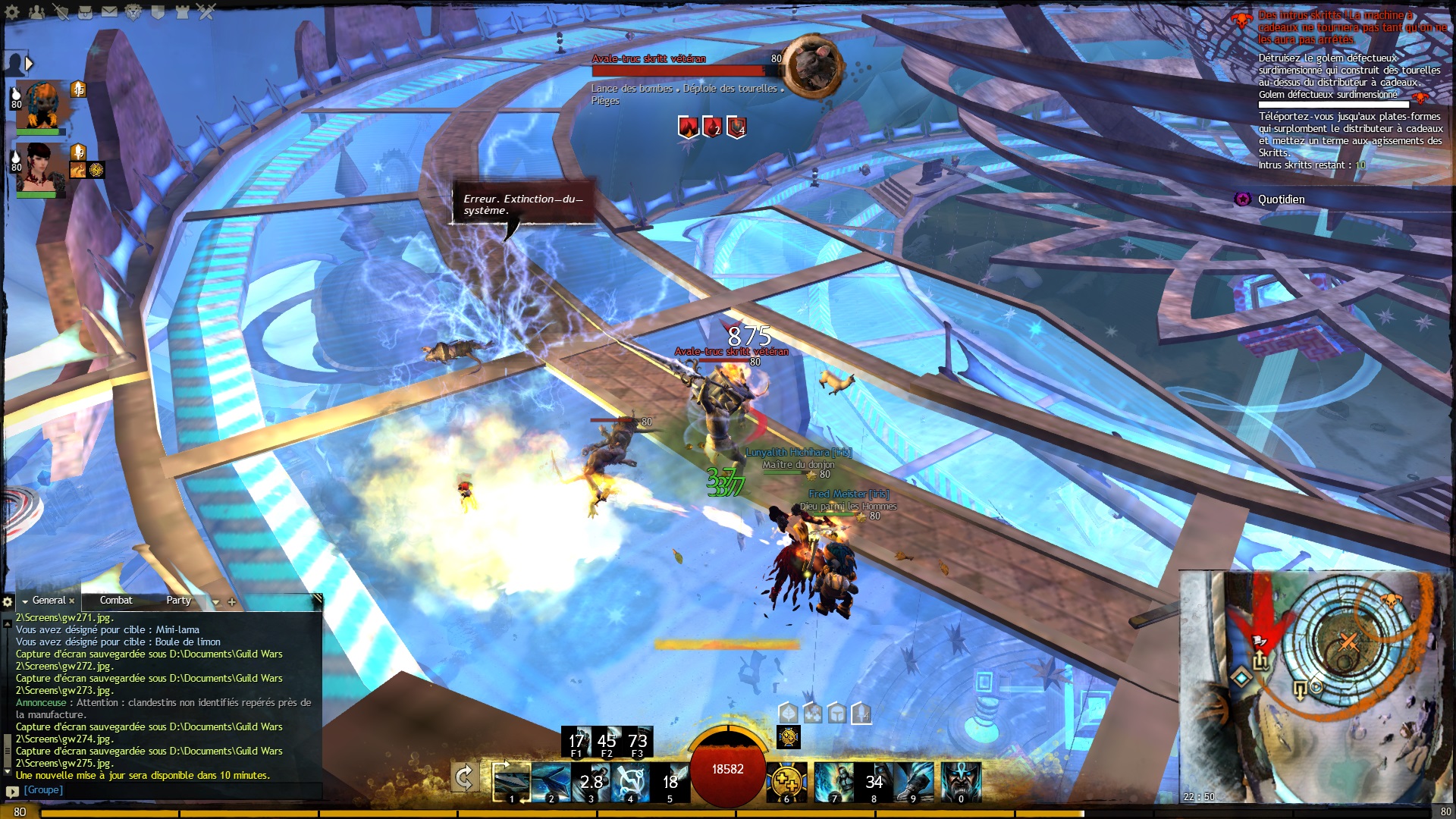 Find fertilizer near buildings on behalf of Ventari figurines

« Tixx the Toymaker needs help around the workshop! »

Here we collect fertilizer (to be able to plant defective turrets, yes). They are sprinkled in the area, and sometimes it will be necessary to defeat a few skritts to obtain them. 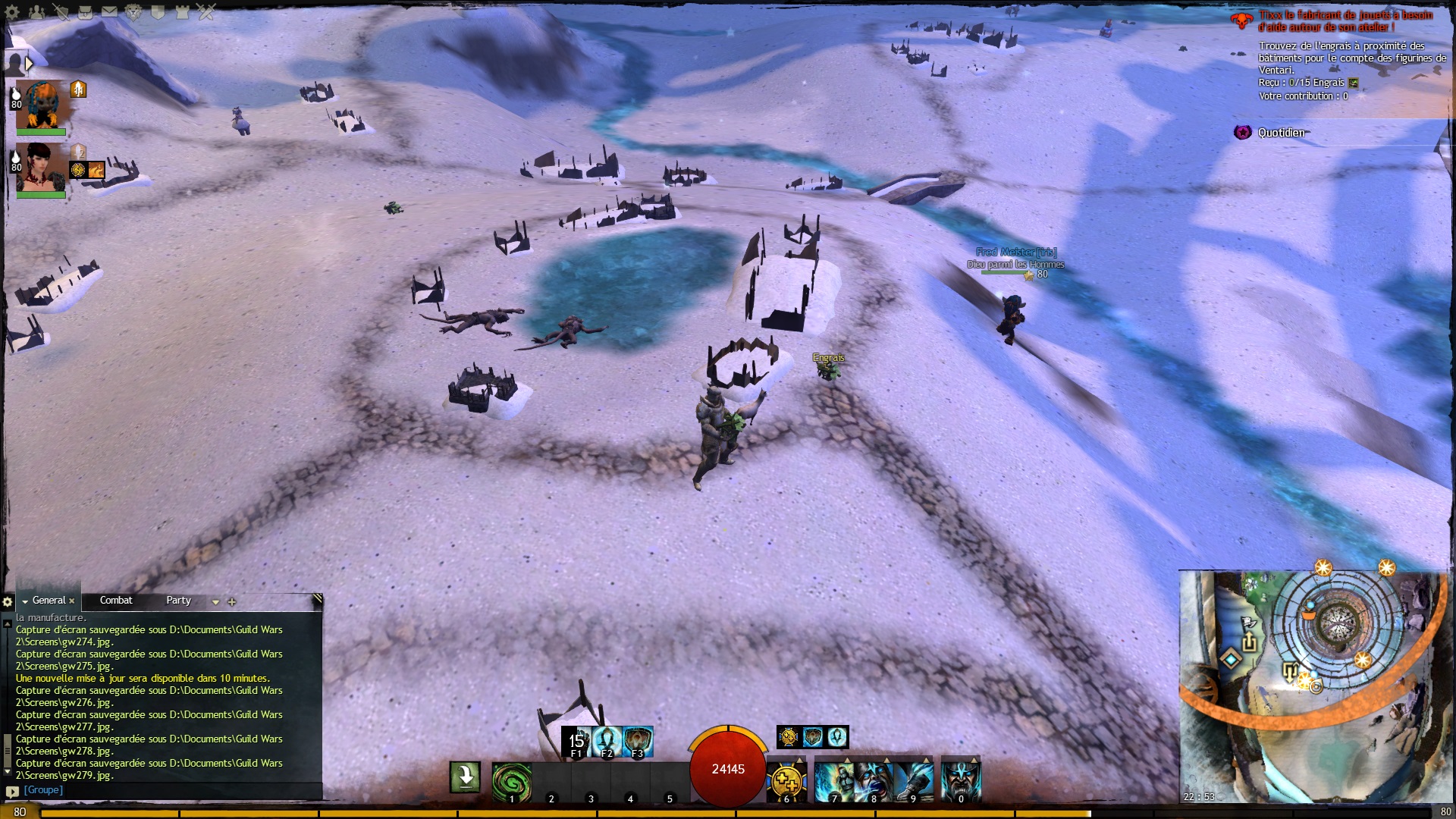 For this event, you just need to burst Toxx. Easy, isn't it ? 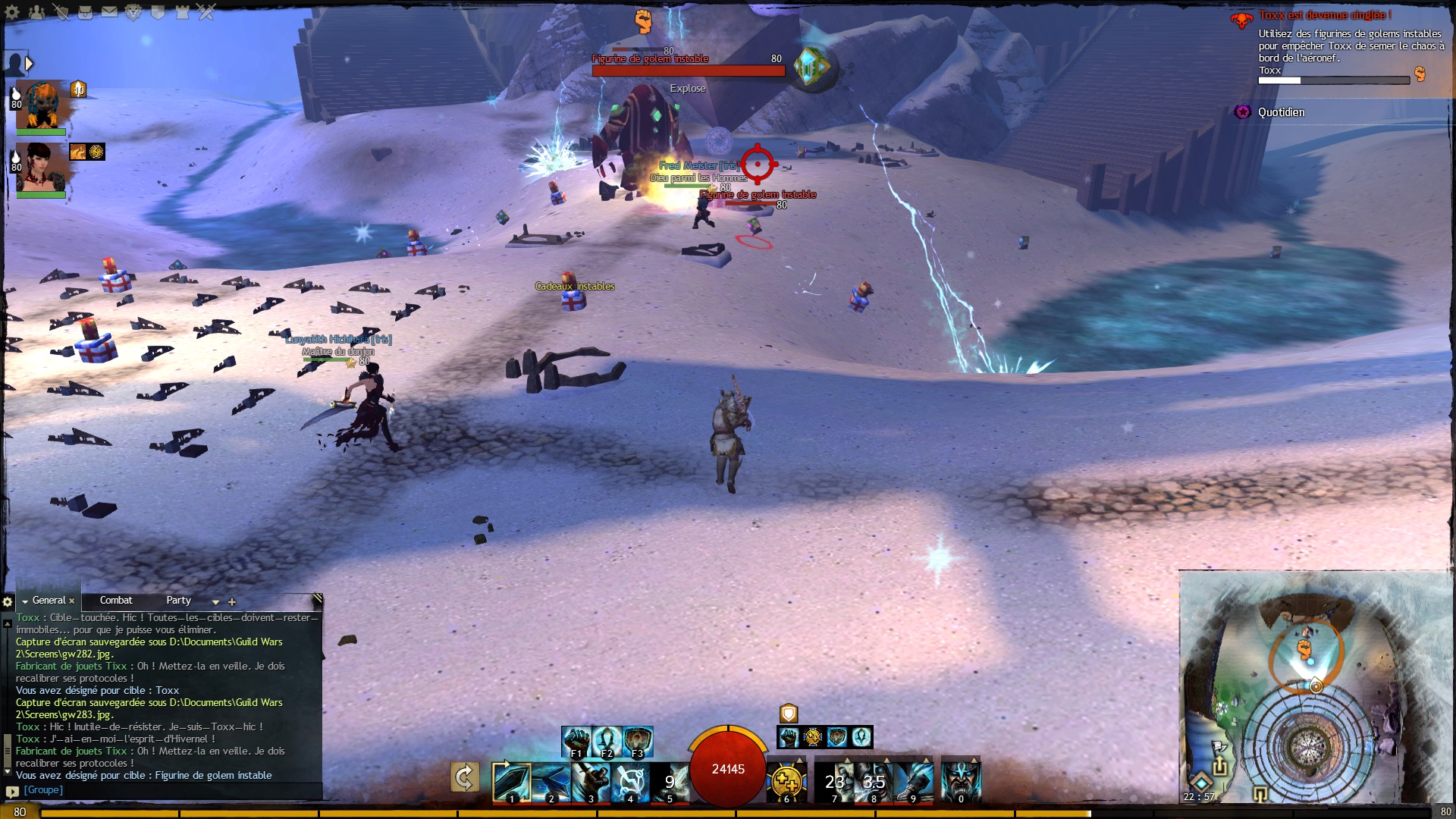