Which server should I choose? Megaserver? What's that?

You downloaded the game and you must choose an original server for your account when you log in for the first time. But what are servers? Can we still play with people from other servers? You will find answers to your questions in this article!

Players generally use the term server as synonymous with world, in comparison with other MO’s. However, in Guildwars 2, the map instances are created on a virtual server that is shared by all worlds.

Players choose an original server when they connect to the game for the first time. This determines the server you will represent in World against World. All your characters will be linked to this original server.

The region corresponds to the location of the data center that will collect information related to your account. This has nothing to do directly with your geographical location.

Players from North America cannot play with players from Europe. Only Private Messages, Letters and Black Lion Trading Company (BLTC) are shared between EU and NA.

If you are in a group and you think you are on the same map as them and all the members are greyed out, then they are probably in another instance of the same map.

Server associations (not to be confused with megaservers) are specific to World Against World. They consist in a group of servers from the same region to fight on the maps dedicated to WvW.

Guesting, a feature that became useless

Since the introduction of the megaserver, guesting is no longer useful. With this feature, you can temporarily join another server for the purpose of playing with a friend there, for free.

To transfer your account from one server to another, go to the character selection tab and click "World Selection". You will then have access to a window that displays the servers, their location (region) and their population.

The price fluctuates according to the current population of the destination server:

Players who switch servers will not earn WvW Skirmish points in the next two WvW games (for a minimum of 7 days and a maximum of 14 days). 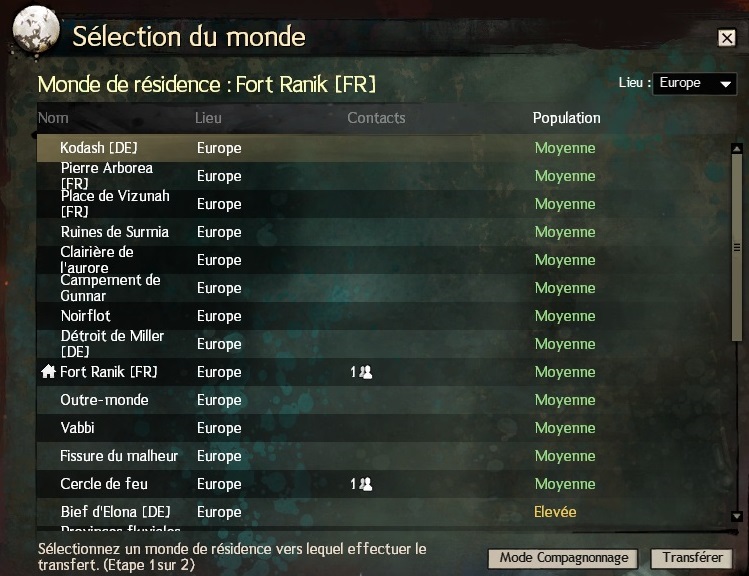