Whisper in the Dark

General Almorra Soulkeeper calls the commander to come and help him at Jora's keep, in the far North Shiverpeaks: the Bjora border.This snowy region is anything but welcoming.Since the call of Jormag, dark and aberrant creatures are gathering and lurking in the shadows, ready to fill their thirst for blood.The Boneskiner roam and whisper in the ears of all those who dare to venture into Bjora's Border, watching for its next prey to devour.

Dress warmly and be on your guard.The shadows of the Aberrant Forest, to the south of the region, seem to engulf lost travelers, the inhabitants of the caves are ready to devour the first adventurer who dares to get lost in the caves and to the north, a blizzard imprisons in the ice the poor hostages until death ensues.

To get access to this episode Whisper in the Dark, you must have been connected between the release date of this episode and that of the following episode or in the contrary case, to acquire it for 200

in BLTC. You can also enjoy the narrative content of this episode without getting the rewards and Achievements by accompanying another player through group formation.

To access this map Bjora Marches, you must finish part of the episode or use a Teleport to Friend in case you have the episode unlocked, If you have not unlocked this episode you will be re-ported to Lion's Arch. There is also a teleportation page that you can buy on the map to bring your other characters.

"Whisper in the Dark" Mastery

and Prize of the Boneskinner Skin

This achievement are unlocked automatically once you have completed the journal entry of the Whisper in the Dark..

The Wind and Nothing More

Complete The Wind and Nothing More.

Interacting with the old scepter, on the desk, in the story instance "Silence". this Achievements doesn't count for the Episode mastery méta-Achievements. 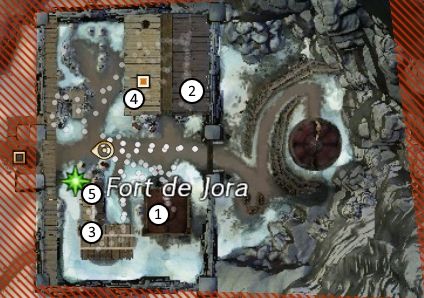 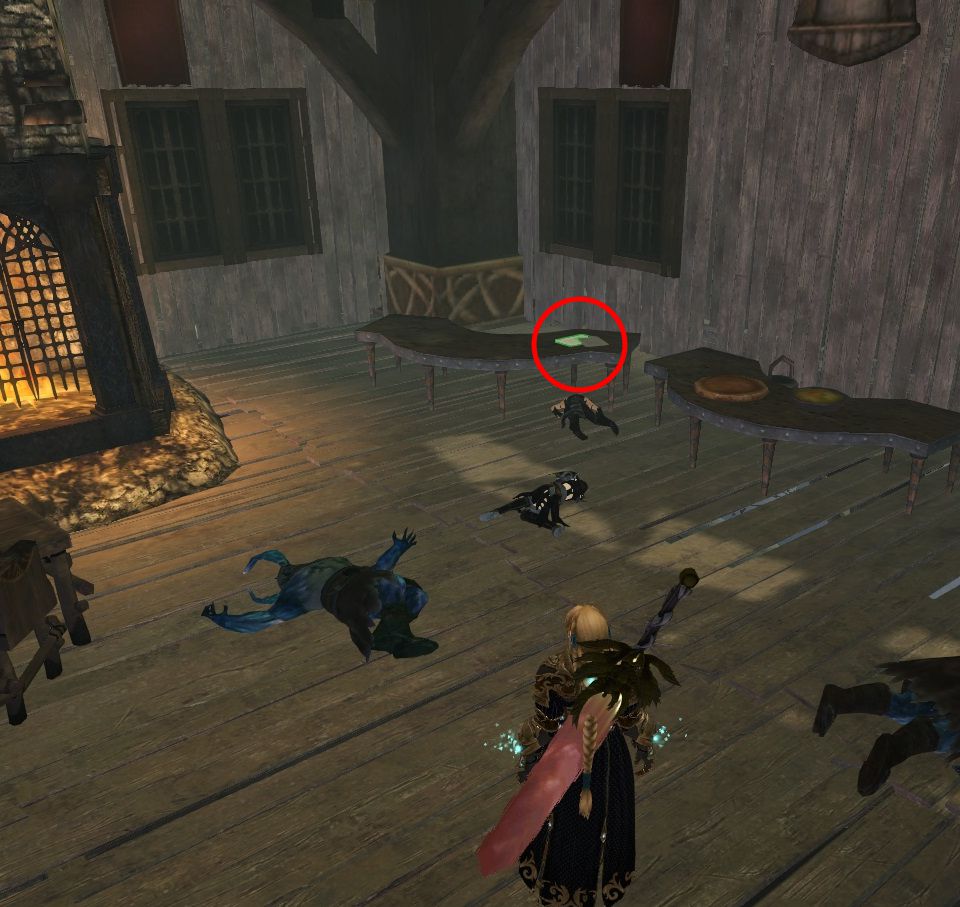 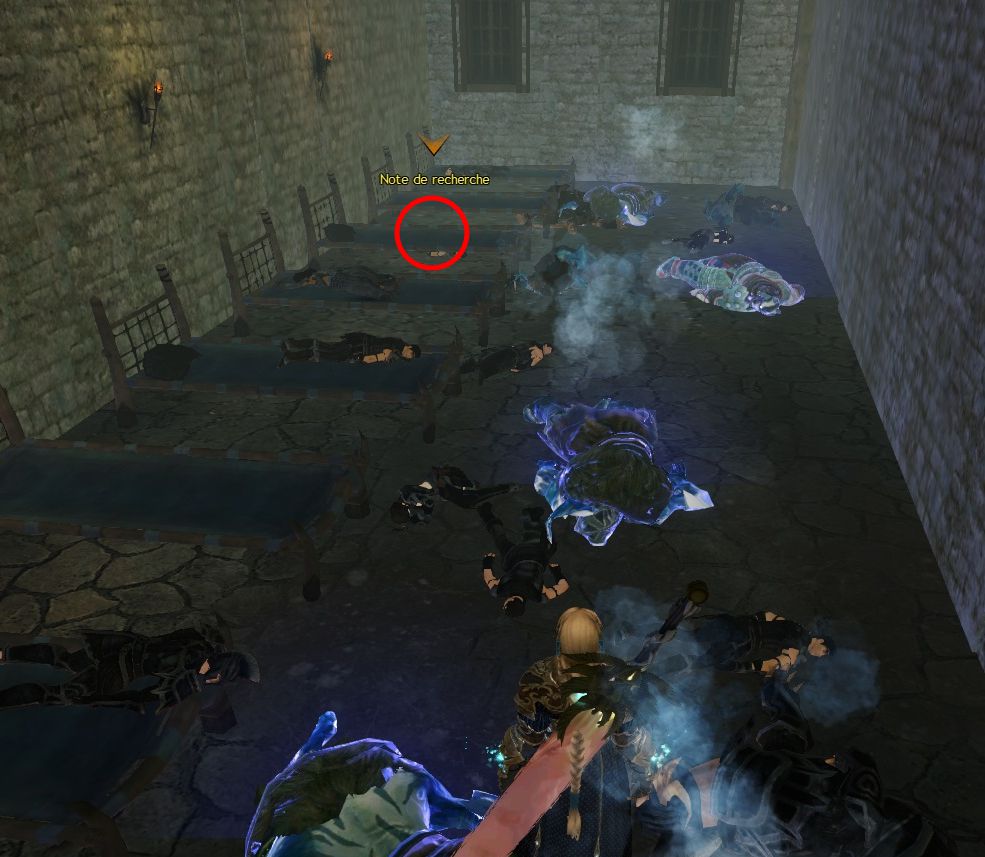 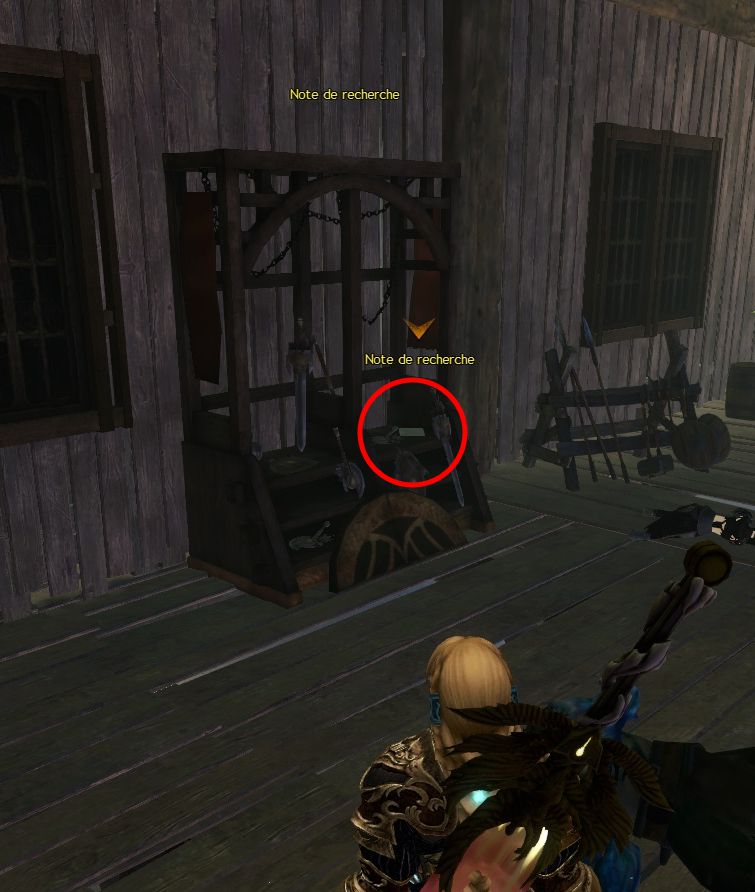 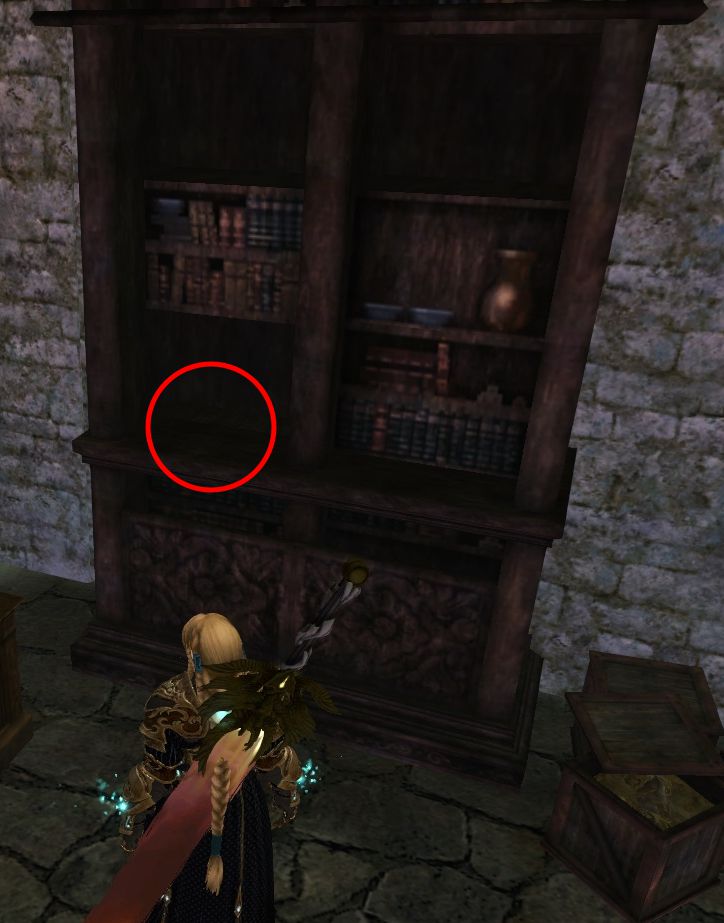 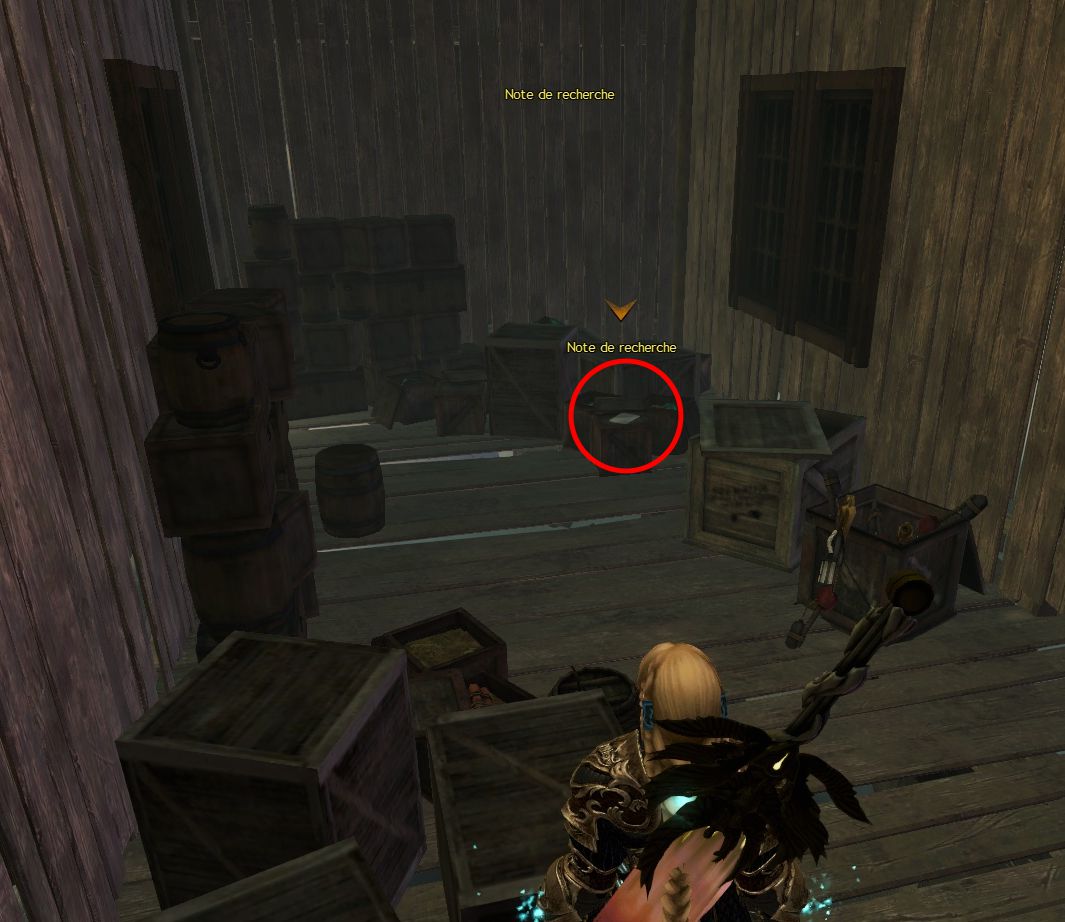 Defeat your haunt in the Necromancer's Ritual event.

This Achievements is achievable in the living-world as well as in the exploration of the open world. The event is located in Ravenfrost Caverns and can also be solved during the "Wind and Nothing more" story mission.During the second phase of the event, when you have to interrupt the ritual by killing the son of svanir and destroying the altars or the third when you have to defeat the necromancer, kill your double.

Unlock the mysteries of the Raven Sanctum

Unlock the mysteries of the Raven Sanctum.

This Achievements is achievable in the living-world as well as in the exploration of the open world. You must unlock the 8 different buffs of Raven's Sanctuary. There are two ways you can do this :

The fastest way to get the achievements is to make the story with 8 different characters. The buff lasts 24 hours and a character who has a buff can not redo the events before the buff he already has expired.

After finishing a mystery of the raven in the open world, you should consider to continue your way through the labyrinth to reach the last chambre. There you'll have the opportunity to open 4 chest. 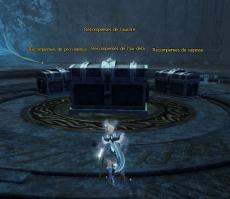 Find the fraenir within 5 seconds after he obscures himself.

During the fight he teleports and disappears in a corner of the room hidden from your sight by a stalagmite. You can spot his position as he is hidden in a snow cloud. It seems that he must also push him to destroy the stalagmites with his attack on line to take advantage of the crows bonus hidden in the stalagmites.

This Achievements is a bit easier in coop.

Zoom in the map 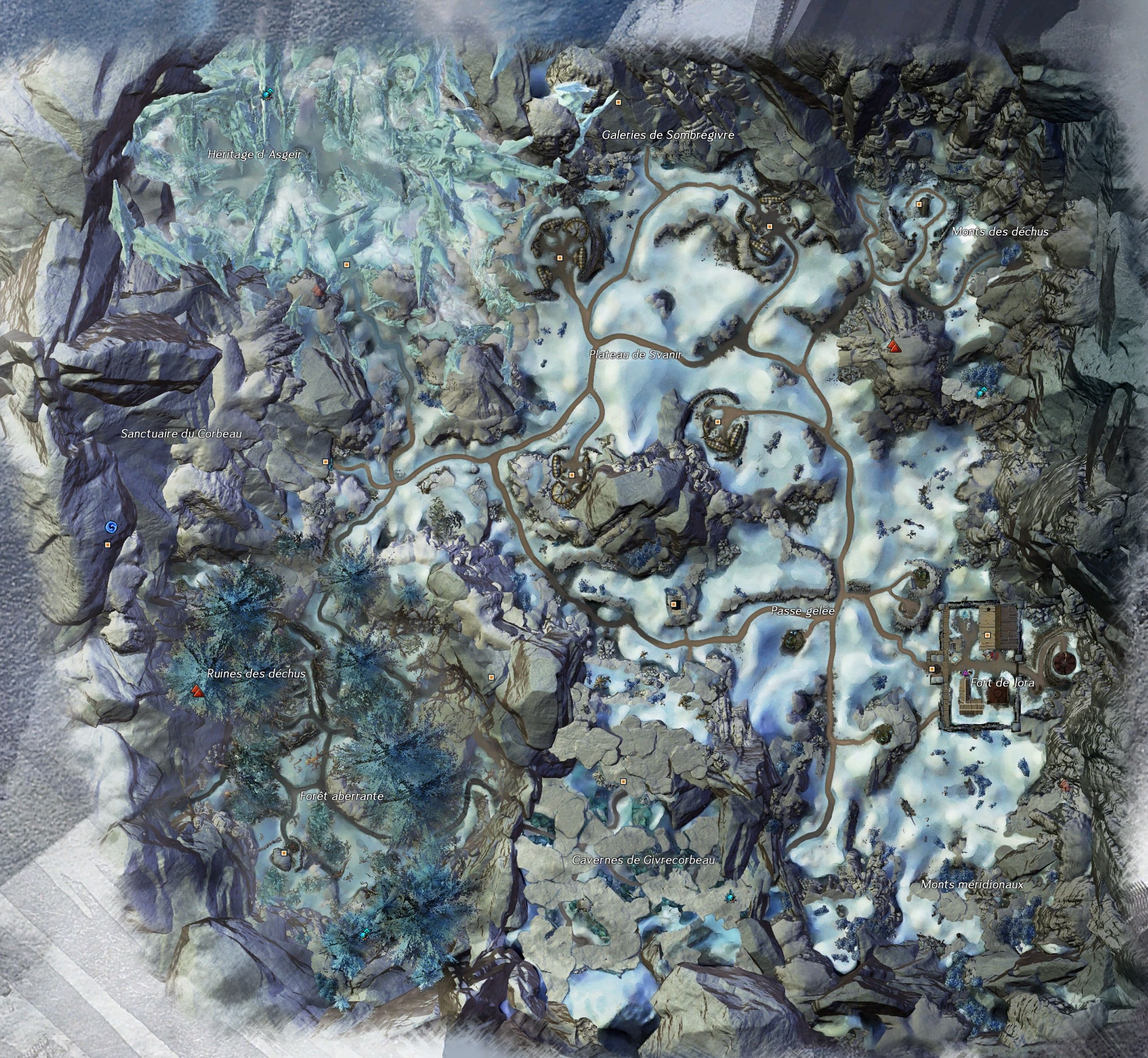 The following guides all have corresponding pages to visit with all the details that allow you to complete the Achievements.

Find the complete guide on the following page :The Hunger.

Find and collect all the lore books in Bjora Marches.

Find the complete guide on the following page : Essence Looter.

Open all of the norn chests within Bjora Marches.

Find the complete guide on the following page : Ancient Weaponeer.

Master of the Ancestral Forge

: Master of the Spirits

Find the complete guide on the following page : Master of the Ancestral Forge.

Claim 15 victory in the Storms of Winter.

This Achievements is not hard, it is just long because you will have to participate and complete 15 times the meta-event of the Bjora Marches.

Defeat all the champion enemies in Bjora Marches.

Reach a blizzard and accumulate 20 stacks of Freezing Cold. You will be trapped in an ice block. Use the skill to deliver. Or help your allies trapped in a block of ice. 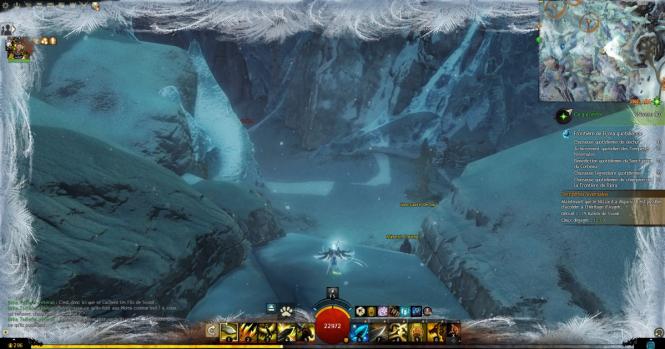 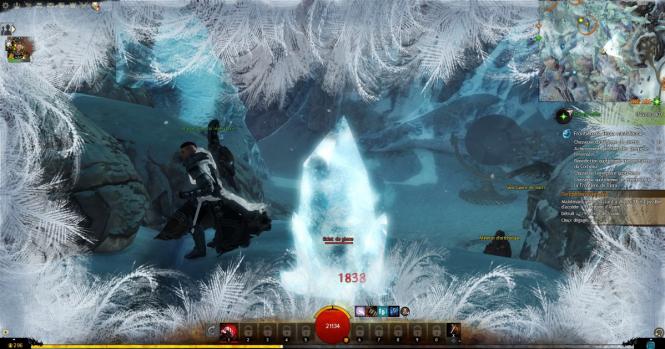 Just get close to Bright Shore in the Aberrant Forest and the Achievements will unlock automatically. Unlock the following Achievements : The Hunger. This Achievements is not in the meta. 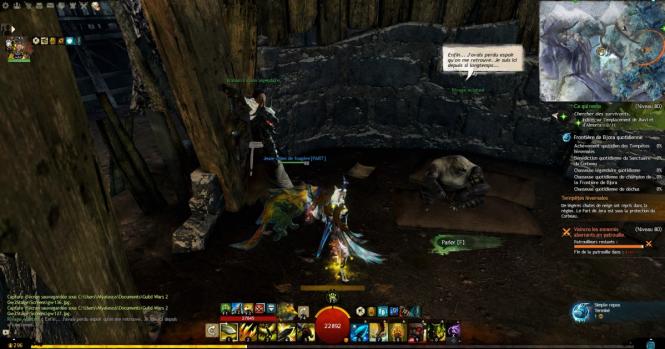 Assist Investigator Eleni in gathering evidence of a massacre in Bjora Marches.

Take part in 10 Investigator Eleni and her dolyak's events, which happen near the Jora's keep where you will need to gather evidences of a massacres. 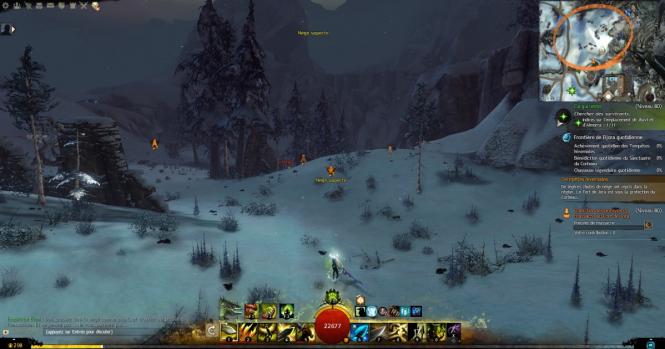 Once level 1 of the resilience mastery obtained, go see the researcher Yarixx in the Jora's keep and perform his training.When you open the chest at the end of the training you receive this Achievements. 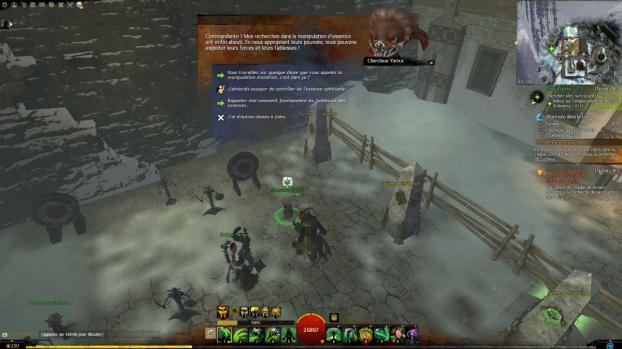 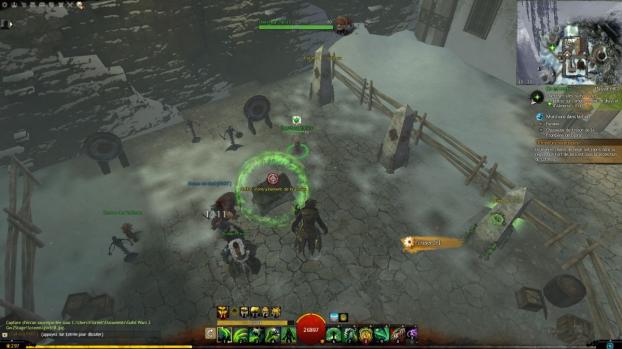 Accompany the Vigil relief crew and defeat the boneskinner in the Aberrant Forest.

This small chain of events consists of three events in total. The events begin with an escort of Captain Igenna Jawspire, which starts at Jora's keep and ends with the bonskinner in the Aberrant Forest. 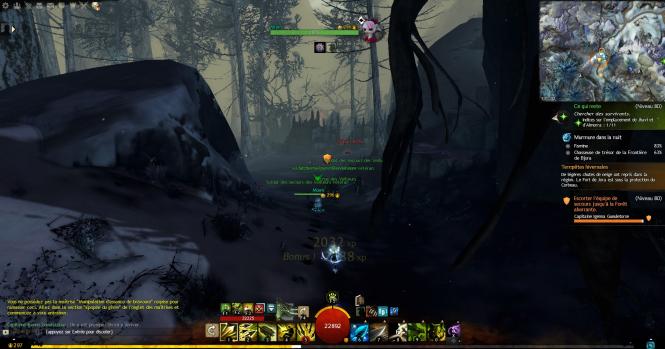 Defeat the boneskinner in the Aberrant Forest without losing any survivors.

The boneskinner appears at the end of the event chain of supernatural manifestation. To achieve this Achievements, you will regularly break the bar of defiance of the boneskinner, so that he does not teleport on his victims. 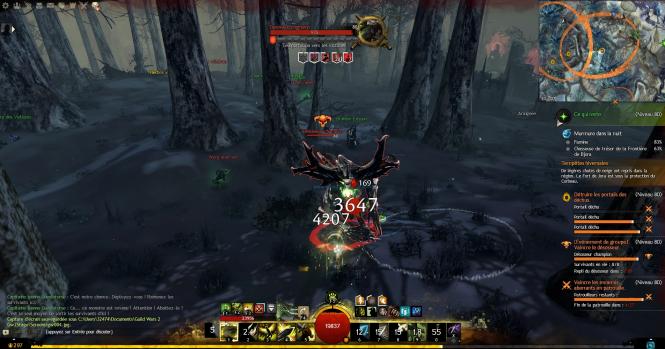 Defeat your haunt in the Necromancer's Ritual event.

For more information about this subject, og check the check guide in the section living story. this Achievements is doable in the living-story as well as in exploration.

Mysteries of the Raven Sanctum

Unlock the mysteries of the Raven Sanctum.

For more information about this achievement, check the check guide in the section living story. this Achievements is doable in the living-story as well as in exploration.

During the capture event of Svanir's Camp South-East or North-West destroy the cook's provisions in the camp.This will reveal a Svanir cook that you will kill in addition to the usual enemies. The Achievements will be unblocked on the death of the cook. 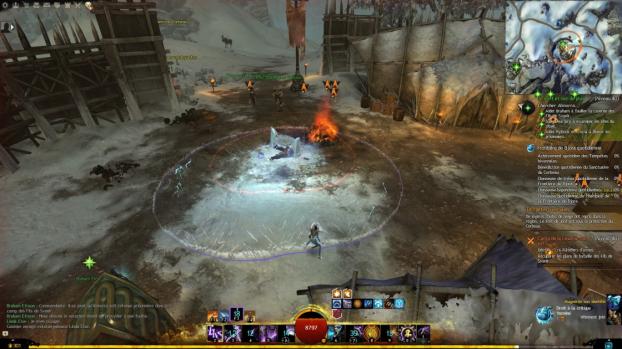 Use a boneskiner tonic to unlock this hidden Achievements. You can buy a tonic from the karma merchant in Bjora's keep. Looks buggy for the moment. 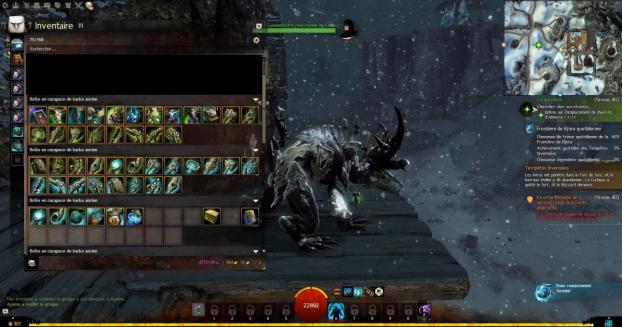 Hidden Achievements : Give In

Use the command /dormir or /sleep near a camp fire or a brasero within the Bjora Marches to unlock this achievement.

Discover this Icebrood Saga Mastery Insight in Bjora Marches.You need to complete the meta-event "Storm of winter" to access this point.

Complete all the light puzzles in Bjora Marches.

To complete the puzzles, you will have to follow orbs of lights from a starting raven totem to an arrival at a Raven Sanctum. Some signs are misguided or inaccessible, it's up to you to change as they go forward for the light to follow its path. First thing to do: activate the starting totem and follow the light orbs to the different obstacles. If you encounter a panel, you will have to calibrate it in the correct orientation so that the light does not go out on the reflector panel but it's sent back to a future destination. If you encounter an obstacle, approach it to destroy it (for example: breaking a wall or removing debris). When the orb of light reaches the final raven sanctum, a chest is revealed to you which gives the corresponding Achievements.

It is advisable to have unlocked the skyscale to travel more easily between the different stages.

Complete the light puzzle in the Southern Mountains.

Complete the light puzzle in the Frozen Pass.

Complete the light puzzle in the Aberrant Forest.

Completed the light puzzle in the chasm around Asgeir's Legacy.

Kill the Boneskinner in the Sanctum arena.

Defeat the High Shaman in the Sanctum arena.

Find all the informations about the 3 news Bosses of the strike mission : Sanctum arena on the following page./p>

Made in collaboration with ArenaNet.